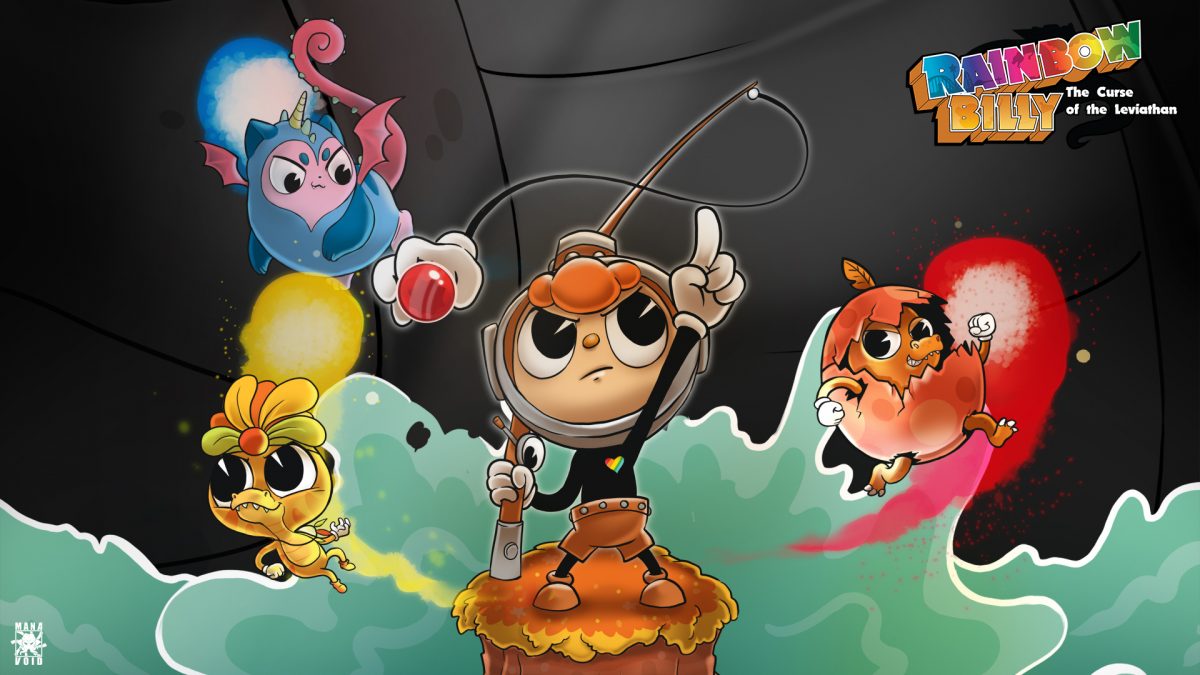 It’s always to pleasure to feel the love that went into a game when you play it. It’s not always the case that you see how much passion went into the development process – and at times it can be incredibly adorable to see a dev team that works on a project with some sort of vision and certain core values that are reflected well in the actual finished game. Today, I wanted to talk about a game like that where you really can see the dev team’s spirit and values! Rainbow Billy: The Curse of the Leviathan embraces ideas and values from the LGBTQIA+ community, teaching the player about Mental Health, finding and accepting yourself, as well as Self-Love and finding a new family – all in a very adorable and satisfying fashion!

At its core, Rainbow Billy is a 2.5D Adventure-Puzzle-Platformer meets Creature Collector where you play as Billy (they/them) who’s the guest of honour at the upcoming star parade. Before the festivities begin, though, something terrible happens: The Leviathan, a grumpy and grey fella, stops by and ruins everyone’s fun by removing the colour out of The World of Imagination so that everyone “has to face reality”, whatever that’s supposed to mean… It’s now up to us, our trusty Friend-Ship, our dog Giro and our punching fishing pole Rodrigo to save the world and bring back everyone’s true colours while making lots and lots of new friends that will aid us in our battle. As we escape from the beginning, we embark on an adventure in a monochrome world and travel from island to island. The only limitation in the World of Imagination is the Curse of the Leviathan that prevents us from seafaring to distant islands, resulting in us having to make stops at nearby islands and fuel up on rainbow fuel. This is kind of a puzzle on its own as we have to figure out where we can sail to and where we can’t. If you overestimate your fuel, there’re no repercussions as you get set back to your previous island without any issues. On these different islands, you’ll find monochrome critters whose true colours have to be revealed and restored as well as collectables and puzzles. With over 80+ unique islands and 60+ critters, you have a lot to do here and the puzzles are more than enjoyable, especially due to the gentle difficulty curve.

Encounters with critters are resolved through battles “confrontations” where you deal with their insecurities, anxieties, problems, and essentially show them a way out. By doing so, you reveal their true colours and can then “attack” them (probably with love – the game’s not that violent after all^^) to fill those true colours in using your captured critters’ colours. There are a lot of them, making the collection element of the game rather essential, especially as critters also unlock abilities upon level up that can restore morale, reveal true colours or even make the “attack minigames” easier! These minigames range from some simple rhythm game button-mashing, and Undertale-Esque dodging, to other sorts of elements that make the encounters feel unique and interesting! More than anything, though, the game taught me, through these confrontations, how to deal with certain mental health issues and how to talk to someone who has built up walls around them.

Topics such as Fragile Masculinity, Self-Love, Anxiety, Depression, Fright, Self-Acceptance, and others are being brought to light here in a way that is understandable and easy to digest. Rainbow Billy does so while not diminishing or devaluing the topics at hand, which is incredibly hard to do with such a touchy subject. Hence I applaud the devs for actually trying something like this out and for pulling it off so well. As a result, the game is unexpectedly wholesome and adorable. I say “unexpectedly” due to the heavier topics here, not the art style that would make you expect wholesomeness. In a way, Rainbow Billy can convey heavier topics while sticking to its sense of humour, puns, and this whole colourful art style that is inspired by modern cartoons. Because of this happy-go-lucky world dealing with heavier topics, the game probably can be enjoyed by both adults and kids alike. Kids would love the light puzzling and the interesting combat as well as the colours, music, and the characters. Adults will see the heavier context and the depth of gameplay and in theory, parents could use this game as a way to teach people that giving people space and listening to them is often better than brute-forcing a problem.

My only issues with the game are that Rainbow Billy requires you to backtrack a little bit if you’re a completionist and it’s hard to tell where exactly “that one thing you needed the shovel for” was again (quoting myself here as I asked myself exactly that yesterday)… but rest assured, one of the developers joined into my stream’s chat and assured me that that exact issue is getting fixed in the upcoming update with a feature allowing you to track better where exactly there’s still stuff to find. Apart from that, the game has a known issue with the camera being wonky at times, although entering photo mode can fix that quite easily, as I found out. The developers are working hard on fixing exactly that, however, so I wouldn’t say that it’s an issue. In essence, the game has more “great” features that increase the experience’s quality than “okay” features that would diminish it. I loved the photo mode, especially as it uses the Steam screenshot feature in contrast to some AAA titles that save files on your hard drive. Similarly, I loved the music and the 2.5D art style.

Frankly, I’m chuffed to bits about having had the chance to play Rainbow Billy: The Curse of the Leviathan! It’s a lot of fun! There are tons of critters to collect, secrets to be found, islands to be discovered, and problems to solve, which is right up my alley personally. Across 30+ hours of gameplay, there’s an interesting campaign with lots of undertones and values to be analysed (at least that’s my jam), so… there is a lot to do here and I frankly enjoyed it all quite a bit. I highly recommend this to anyone searching for a wholesome game to play while you’re returning to normality in the real world.

2 thoughts on “Indietail – Rainbow Billy: The Curse of the Leviathan”