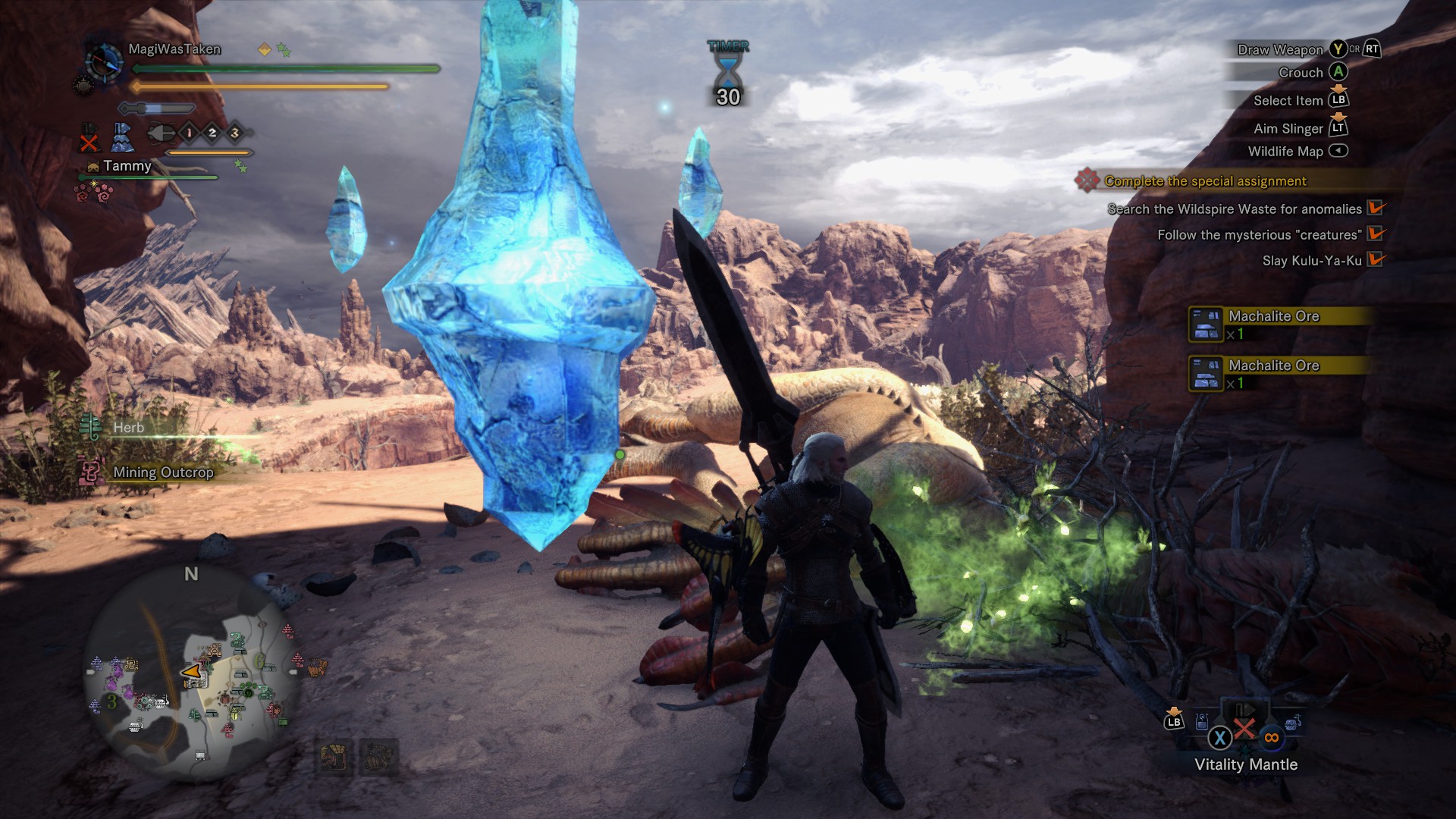 After our successful hunt of the otherworldly Leshen, we were able to unlock the “Geralt-costume”/full body armour that has some very nice stats. So next up, we had to beat the next quest, “A Visitor from a Different World”. In the Wildspire Waste, a new creature has been spotted that looks similar to the Final Fantasy cactuses… and after chasing it, we found a huge crystal that was able to make a Kulu-Yaku grow…. a lot…. like Godzilla-level lot…

So naturally, we tried to slay it for some big eggs and big omelettes, but eventually, after making it, we discovered that the Kulu-Yaku didn’t drop any giant eggs and instead was just magnified. On top of that, we learn from a friendly Moogle from Eorzea that it and the crystal came to the New World using some aether-energy and that they need to get back to their world but can’t due to the Behemoth…

So now we had to slay that and after my first try, I realised that it’s impossible to beat it alone – at least at my level.

Note: There were actually three quests for this one…. so to speak, it was more of a quest line: First we went to the Wildspire Waste and have slayn Kulu-Yaku (Quest Name: A Visitor From Another World), then we went to Elder’s Recess to Repel Behemoth (which already asked a lot of us) (Quest Name: The Legendary Beast) and then we had to slay Behemoth (Quest Name: He Taketh With His Eyes). This post essentially talks about the last part of the quest, so uh… yeah. Have fun.

Therefore, we geared up for it and brought a bunch of potions, powders and charms with us, as well as two friendly hunters from my stream’s community and an SOS flare…. and even as four hunters and even with our combined skills, we didn’t make it for yet another three tries.

So, a couple of weeks later and after unlocking the Temporary Mantle (my new best friend – a gadget that allows me to automatically dodge every ability), we tried again. This time around we had a strike plan and I brought additional flash bugs to craft into flash pods.

The Behemoth counts as the hardest monster in the New World and essentially has a few different phases on top of a few different attacks with one of them being instadeath.

Our foe here can be found near the lava caverns in Elder’s Recess and therefore, we had plenty of time, after spawning at camp 1, to wait for the fourth hunter to come in (SOS flair and all of that) so that we buffed using the Hunting Horn and also got some Wiggly Litchis in. Once everyone arrived, we went into the cave and immediately triggered the crystals above Behemoth, to get some easy 3000+ damage onto him.

Now for the Behemoth’s attack, you’ve got to watch for plenty of them. One of them, Charybdis, essentially takes a bit of time to charge up and creates a tornado, similar to Kushala Daora’s. If that tornado is created over a lava flow, it creates a fire tornado, which is more than unpleasant. To stop Charybdis’ charge, we’ve got to flash Behemoth while he’s charging and can then just attack him. His first attack is always Charybdis, so you always should watch out for that.

One of the four players that take on this quest needs to hit Behemoth’s head a couple of times to get its enmity. Enmity is shown as a red line that connects you with its eyes and it essentially means that Behemoth is angry at you and will focus you with its attacks, including his deadly charge and his claw attacks. Behemoth really hits hard so after one player has its enmity and can draw out those attacks, everyone else can damage Behemoth and even cut off Behemoth’s tail in the first phase, if done fast.

With my Insect Glaive and with the other players’ claws we were able to mount it a couple of times and get a lot of damage in, so the first phase isn’t much of a problem. If possible, one should try to not use up any of the mantles (like the temporal mantles) in the first phase and instead use them only at the first and third phase.

For gadgets, health boosters are really fine for some free healing and increased health now and then, on top of the temporal mantle. Behemoth hits hard and takes a lot of time to kill, so naturally, these two gadgets would be superb against it.

Behemoth can cause some fire damage with one of his attacks while another one can summon a comet that deals a lot of damage. When they spawn, remember where your position is compared to the comet’s at all times and try to not move too far away from it. That’s important as Behemoth also uses one attack named “Apocalyptic Meteor” that summons one big meteor in one spot that essentially instantly kills everyone who doesn’t hide behind the comet that he summons. This attack can’t be cancelled either and the success of the mission depends on good comet-spawns and some great reactions!

Alas, after hiding behind the comets and figuring out how we wanted to position and stuff, we finally managed to kill the Behemoth! Hooray!

This unlocked not only the Dragon Soul for my Glaive (a great bug that does a lot!) but also the Drachen Armour Set (best armour in the game in High Rank and best armour for the Glaive) and the Moogle Palico Armour (very cute!). There’s still an extreme version to the Behemoth, but I guess that that will have to wait until we get to Iceborne content. After all, we now have our awesome Drachen armour and also managed to get through all of the main quests and special investigations with a lot of the optional ones being completed.

So while Behemoth was very hard and needed some coordination, it was a pretty cool fight. I loved how it displayed what attacks we used on the right side of the screen, similar to JRPGs, and I liked how the music and the fonts changed to FF-ones. Overall, this was a great fight and a great quest and I’d love to see other cooperations with other franchises apart from the Witcher and Final Fantasy in the games.

Either way, that’s it for today’s post. Hope you enjoyed this one!