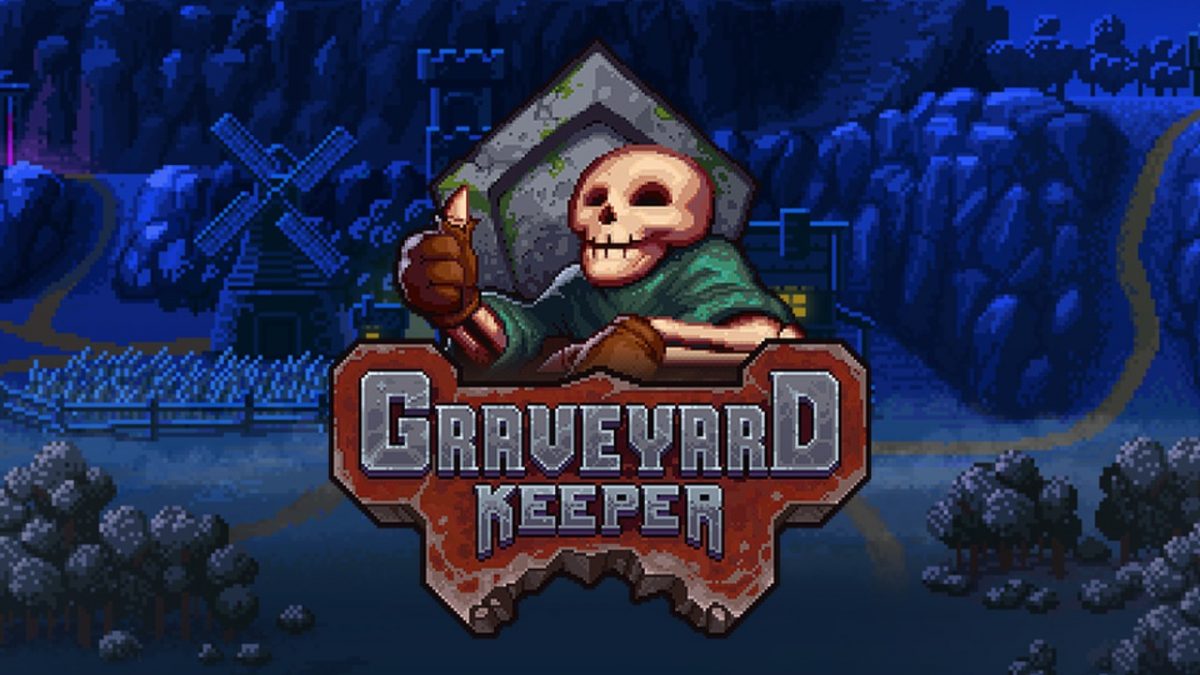 There’s something nostalgic and satisfying about farming sims that I just can’t explain. I loved Harvest Moon and Stardew Valley, for instance, and I spent hundreds of hours in the latter. I mean, partially, I feel like I accomplished something after a nice session of Stardew Valley… but I also still don’t know all that much about some mechanics in that game and I certainly haven’t explored all the possible nooks and crannies, features and romance routes in that game. Either way, today, we’re taking a look at another farming game that is as satisfying and time-consuming as Stardew Valley but with a twist to it that I find very fitting for the spooky season: Graveyard Keeper!

After finishing work, you look forward to spending time with your partner and… then you get run over by a truck. But fear not, as you awaken you’re in a medieval world where a talking head fills you in on the possibility of a way back home. Yes, this is technically an Isekai. Anyway, you’re now the graveyard keeper and hence, you now have to tend to the graveyard, hold church services, craft and sell items, do research, reanimate the dead, explore dungeons, complete quests, and look for a way back to your partner… There is a lot to do but that’s only natural for a game that could easily be described as Stardew Valley’s darker cousin.

The main gameplay loop consists of tech gates and unlockables. When you cut down trees, craft items, cook, research, and write, you essentially earn experience points for various new technologies. The tech tree is immense and there’s always another technology that you may need for this one specific thing you want to craft. Hence, you grind down on the tech tree until you’re satisfied with your current goal before you find out that there’s more. It may sound tedious but it’s executed quite well and I found it rather satisfying to follow along. The lack of a tech tree of sorts is kind of what bothered me in Stardew Valley. Sure, you have the community centre and the skill tree… but in the end, there is no real end goal to Stardew Valley and it’s easy to lose track or motivation. Graveyard Keeper kind of fixes that by making the game technically finite with an end to the story. At the same time, you can still do your best to build up a farm, make your graveyard as pretty as possible, or pursue the different quest lines in town!

What I found interesting is the way that time never stops. You don’t have to sleep or eat or anything, really, time just moves on. You can fast forward by meditating, but in essence, there is no stress for anything. On seven different days, you can meet up with different people, including a bandit, a bard, a beauty, and the inquisitor… and these essentially task you with delivering certain items to them, further implementing this sense of purpose into the gameplay loop. Naturally, you then start looking for the necessary items needed, the technologies you need to unlock, as well as the experience needed for that. And well, it can all get a bit grindy but once you start to notice the grind, you’ll most likely have unlocked the helpers that you can use to automate the processes of crafting wedges and marble slates!

What bothered me a little is that, while the game is advertised as being full of moral dilemmas, there never really are any repercussions for it. You can harvest bodies and sell their meat before dunking them into a river to maximise your profits. You can dig up people and reanimate them. You can help the inquisitor and the witch at the same time. You may even build up a skull throne and experiment with your alcohol and other services… But no matter what you do, you just get away with it… which is kind of fun but also breaks the immersion a little bit. Naturally, the game is also very grindy and while I didn’t find it tedious, I can see that other people may not enjoy it quite as much unless of course, they liked Stardew Valley.

I’m comparing the two games quite a lot despite the differences here, but I think that the comparison is justified due to the capitalistic and relaxing nature of both games. You can earn lots of money in both games and both games can be very time-consuming. Before you know it, you’ve played for a week, your partner has left you, and you’re about to get evicted, but at least, you’ve gone through the majority of the smithing tech tree… Hooray! But if Graveyard Keeper goes in deeper on the perks and the tech tree while it’s also more flat on the social front. There aren’t any romance routes or interactions with other NPCs. You have dialogue options that change over time based on your relationship with them but it’s rather tame in comparison. Similarly, the farming can be a bit tedious in comparison because it’s a tad more in-depth, I guess, but oh boy, it feels good to finally make some gold-quality wine!

And well, the art is quite pretty, although I still can’t get used to the character model. Combat is also a thing, though relatively simple. The music can get on your nerves from time to time… My biggest issue with Graveyard Keeper is the storage problem. You only have so much space where you can build stuff and you can’t just sell off every single item to every single vendor. The smith may take your nails but not your crops, for instance, which makes sense and adds to the immersion. With the limited storage and the limited space, it gets a bit annoying from time to time to have to craft more stuff… mostly because you need to first find the items and then you also need to figure out what you’ll throw out instead of where you put your other stuff.

Overall, though, I find Graveyard Keeper to be a deeply intriguing title that is very satisfying in its ability to take your mind off things. You can automate different processes and decorate your church a lot. I found it incredibly intriguing to play as “the bad guy”, in a way, even though you’re not the antagonist in the game. While storage can become a problem, I still found the game rather lenient in most cases and to this day, I would count this title among my favourite farming sims, for sure. I’m definitely recommending this one!

One thought on “Indietail – Graveyard Keeper”