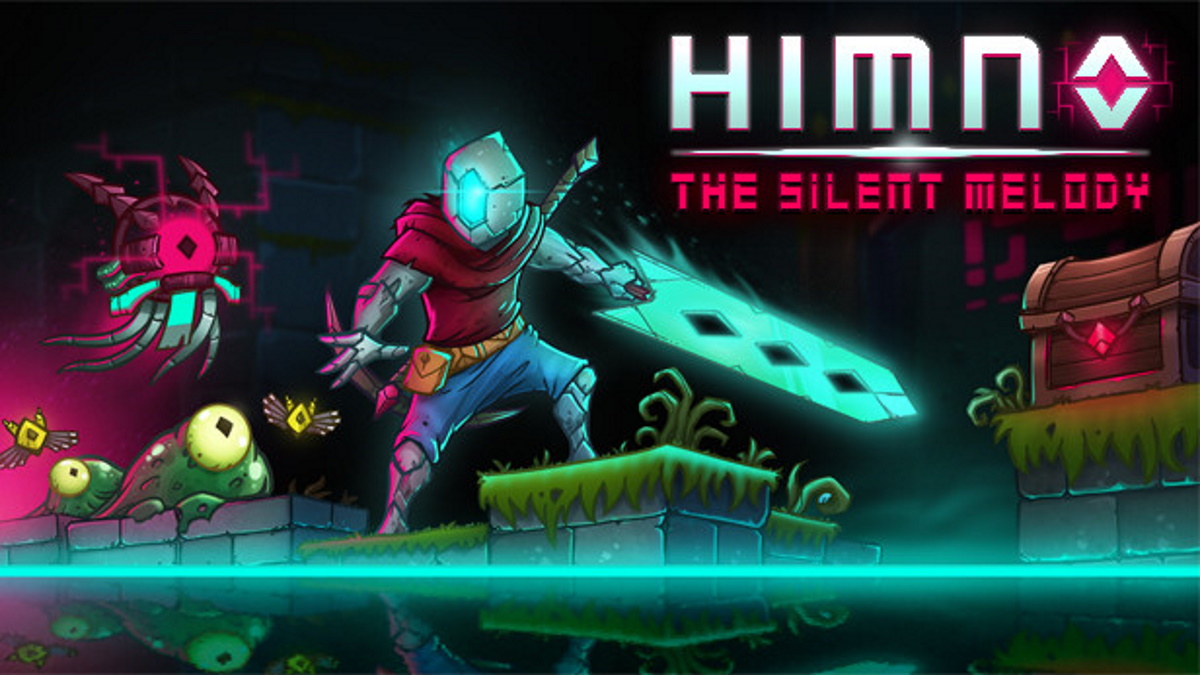 Truth to be told, Himno (2019) is a game I briefly played but didn’t really like. The controls were wonky. The world was beautiful but empty. The premise was serene yet unfulfilling and it wasn’t really a game for me, which is why I left it at that when I first started it up. What the prequel didn’t do well, however, got improved plenty in the game we’re talking about today. Himno: The Silent Melody (from here on onwards just “Himno”) is a more polished version of that base premise combining a serene world with rogue-lite mechanics as well as a formula that got me quite intrigued. Gather resources, create a unique arsenal of weapons, build up your base, automate processes, and conquer the different districts, freeing them from the corruption that remains to this day.

In Himno: The Silent Melody, you guide “Fash” on his quest to take on the corrupted machines and rescue the other guardians. To do so, you embark on your journey, gather resources and return back to base to utilize the materials gathered to construct workbenches and other objects that will help you on your mission. Your base area is somewhat empty. The only other person there is a unique fellow that grants you benefits in exchange for money. Hence, you need to fill this base with machines that help you out – alone or with a friend in local co-op. The core premise is relatively basic. You go out to the different districts, fight off enemies, claim stat increases and runes, and loot chests to get stronger. Instead of increasing permanent stats, you may unlock abilities at the NPC I mentioned before that work passively and grant you various perks. One of those, for instance, allows you to mark enemies with a wisp, allowing you to deal more damage to that enemy while they’re marked. This then can be further increased – or you spec into a different perk entirely, although further upgrades tend to get pricier. The currency needed for this process is relatively easily acquired through achievements as well as random spots in the world. As you explore areas, you may find the currency in chests or different spots, lighting up as yellow gems of sorts that you can then collect.

While its predecessor felt incredibly wonky, Himno (2021) feels incredibly fluid and fast-paced. While the jump action is a bit more constrained, it feels better to use. Meanwhile, the dash feels more powerful and allows you to quickly weave in attacks before quickly repositioning yourself to a safe distance. And yes, while Himno’s prequel was 100% peaceful, the world of Himno: The Silent Melody features plenty of dangers. From slimes, bees and robots, to powerful guardians blocking off your path entirely until you beat them, Himno has a lot of enemies at its disposal for you to dispose of. Successfully clearing the corruption in a given area rewards you with a bonus of sorts. This bonus can grant you items and potions but also stat increases and runes. These stat increases may affect your cooldowns, defence, luck, or your crit chance. Meanwhile, runes can be activated to create a build of sorts, allowing you to play around with specific mechanics in the game. There is the charge rune, for example, that grants you a speed buff whenever you block with a shield. Meanwhile, other runes may release a powerful flame explosion around you when you get hit. Yet another – and possibly my favourite – awards you with an extra dash. The list goes on and I’m sure more will be added as time goes on.

While I’d say that Himno is a rogue-lite, I didn’t entirely like the way it works. You don’t gain synergies of sorts, apart from the runes, really. Instead, you find and craft weapons that have random keywords to them, increasing their stats in the process. These weapons define your build. You may attack from afar using a bow or boomerang, strike your foes with powerful spell tomes, utilizing mana, or you get up close and personal to enemies and bash them with powerful melee weapons at the cost of some safety. The “magic” option seemed intriguing to me but as your “essence” (mana) is tied to your health bar, I found it hard to utilize tomes against bosses. The lower you get, the less essence is available to you, meaning that you may not be able to rely on it too much either. Some other weapons, i.e. guns, may utilize ammo and/or essence and sound more reliable in a way. The issue with those, however, is that ammo needs to be crafted up or found in the world. Once you’re out of ammo, you’re out of power. Hence, my core builds usually revolved around boomerangs and melee weapons, getting up close when I felt safe to do so and dishing out ranged damage when the enemy was shooting out barrages of bullets. To a degree, Himno feels like a bullet hell game where every misstep is severely punished. While it adds challenge for sure, I found parts of it quite frustrating.

For instance, dying will completely remove all of your items and runes, on top of wiping your stat bonuses, meaning that you only return to base with your money and your trusty sword. It’s frustrating when you’ve collected a lot of materials that you needed and you accidentally stepped into the boss arena when you wanted to return home instead. This mechanic of completely wiping your inventory feels frustrating because it’s in a way counterintuitive to the progress you want to make in your base. You may have wanted to craft an anvil or a few chests but you lost all the goods and return home empty-handed. I believe that Himno would feel better if you could keep the items in your hot bar, at least, meaning that you may return with some of your weapons instead of losing anything you crafted beforehand. Similarly, there are potions in the game that allow you to return home pre-emptively or portals and statues that do the same but the potions also only let you return with a percentage of your inventory, which is probably there for balance’s sake, though somewhat annoying to use. It’s never clarified what items get taken with you and which ones aren’t. It feels like a gamble that I don’t want to necessarily take.

Atmospherically, though, Himno feels incredibly great. The world is serene and the different districts make me wonder what sort of civilisation lived here beforehand. Who has built these walls here? What kind of people were there before the machines were corrupted? The machines in themselves seem quite powerful and futuristic, most of the early areas, however, are rather medieval… so what exactly happened there? The soundtrack accompanying your exploration is incredibly serene and sombre, allowing you to relax for a while. The peaceful music paired with the constant rain sounds creates a beautiful experience for you, the player, that I find rather wonderfully done. It was incredibly pleasant to explore ruins and jump around from area to area, in search of the gateway to the next stage. Meanwhile, the detailed pixel art world, the bright and simplistic UI, as well as the incredibly well-done lighting are enriching for your experience.

All in all, Himno could probably be best described as a mix of sandbox and roguelike games. It’s serene, mysterious and looks absolutely stunning, but the combat can feel incredibly punishing at times, making you really want to step up your game. Still, I’d recommend this to anyone looking for a bit of a challenge or anyone interested in a game to play locally with a friend that may push you both to your limits. As the game is in Early Access, there may come changes to the formula, so beware of that. Potentially, there will be some balance changes to items, some changes to what items return with you on death, if at all, etc. I can see a lot of potential via the formula and I’d recommend checking it out for yourself. If you want to, Static from Overage Gaming published a review on the demo a while ago. Make sure to check that out as well if you’re interested in another opinion of Himno: The Silent Melody.