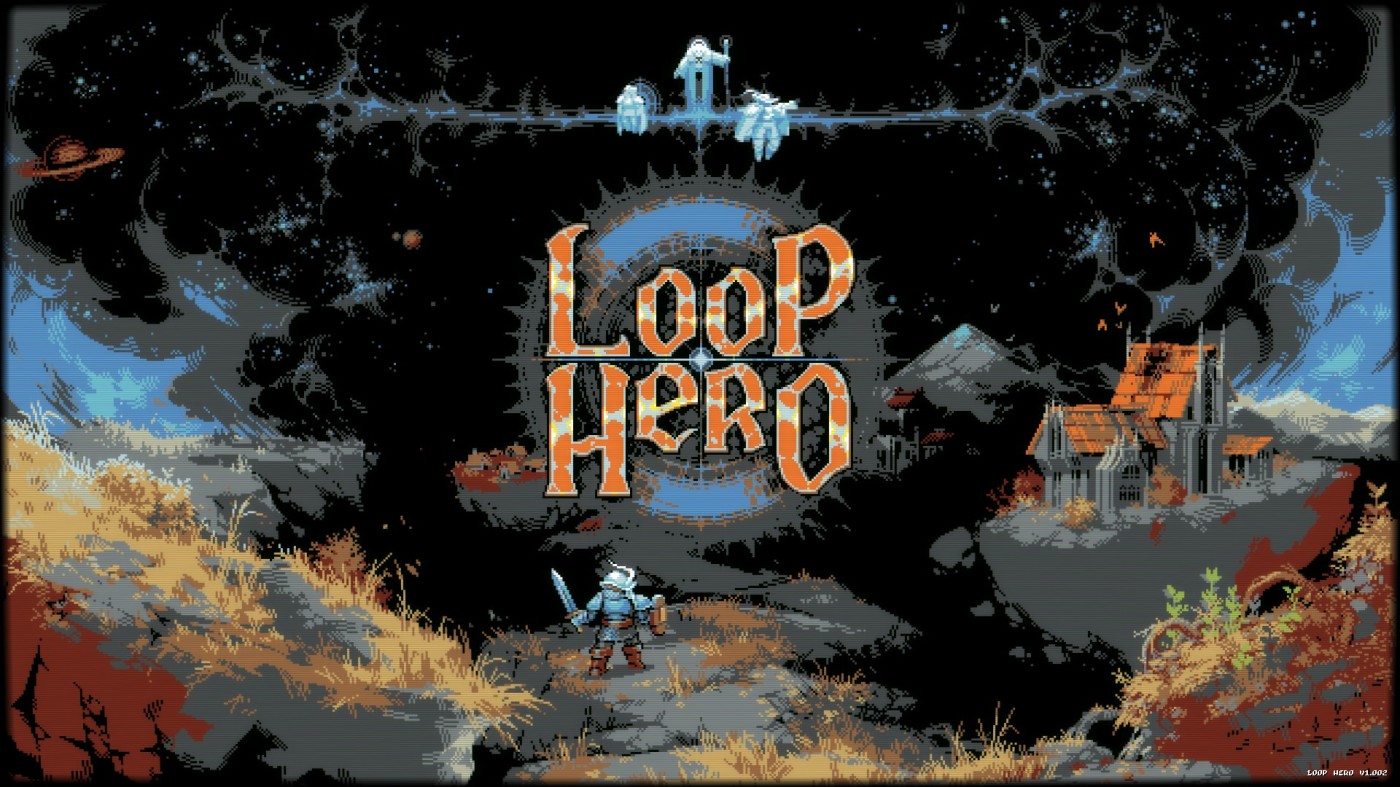 The Lich has thrown the world into a timeless loop and plunged its inhabitants into never-ending chaos. This time around it wasn’t me, though, as I stumbled across this game during the last Steam Game Festival and got hooked to its simple yet satisfying premise and truly addictive game loop. (Get it?) Today, we’re taking a look at Four Quarters’ Loop Hero.

Loop Hero starts by having the protagonist of the game walk away from an amnesia-like haze. The world is plunging into chaos and darkness as the Lich or potentially something bigger than him is destroying the world over and over again. But you have the power! You remember! You walk into the world and can reconstruct it using different tiles and equipment pieces to get stronger and shape the world. You don’t control the game, however, as the game controls you.

Your character walks down a fixed path and battles against monsters that spawn every few days. You can pause the game or speed it up a little bit but there isn’t much for you to do… until you beat some slimes up. Monsters either drop card tiles or items. Items buff up your stats and increase your chances of survival in this hamster wheel of an idle-ish RPG while tiles can be placed to restore the world. Mountains and rocks buff up your HP when placed next to each other. Groves will give you sticks when you walk through them but spawn ratwolves every few days. Villages heal you and grant you quests while battlefields give you a chest or mimic to fight at the start of every loop, rewarding you with items, but may also turn nearby enemies into Ghosts. There are various interactions between different tiles, creating new tiles and allowing you to strategise about how you want to rebuild the world. Placing down nine rocks or mountain tiles in a 3×3 shape will turn into a big mountain which also buffs you up furthermore with more HP but may spawn Harpies on nearby tiles. Meanwhile, other tiles can create interesting synergies, like Vampire Mansions that ransack villages and turn them into the count’s lands after three loops. It’s an interesting loop of fighting, levelling, equipping and placing before you fight again, but a lot of things are out of your control.

At any point during the loop, you can decide to return to the camp that somehow still prevails. If you continue onwards, you risk dying to the enemies that get stronger with every loop… and you may lose it all, so be wary of that fact! But speaking of the camp,… There is something about you that gives the people there hope, and as you gather resources like metal, rocks and rations, you’re able to upgrade the camp and expand it, unlocking new tiles, features and even new classes, which certainly reinforces the people’s beliefs in you. If you don’t return to the camp and end up dying, you’ll lose a lot of your gathered resources and be forcefully ejected to the camp. The world gets reset and you’ll have to go on an expedition, yet again, to rebuild the world slowly.

By placing down more and more tiles, you’ll fill up the world completion meter. Completing that will summon the boss to your camp. Each boss plays differently and can be rather challenging. The Lich’s health pool is bound to different temples near the camp, for instance, that can be removed with Oblivion cards while other bosses utilise other interesting mechanics that make every chapter more interesting than the one before it. Once you’ve reached the boss stage of the game, you complete your final loop and are graced with an amazing soundtrack created by blinch, one of the developers. The soundtrack is amazing and I linked one of the pieces above. The combination of the rather detailed pixel-art style that is a throwback to old retro titles and the chiptune-y and classically 8-bit tunes is amazing and works really well for the game… but more than anything, Loop Hero’s soundtrack gets me hyped up. It’s unique and fun and amazing and I love it to bits.

I truly love these interactions between cards and characters that suddenly emerge from the tiles. You encounter vampires, harpies, and bandits, and your character talks to all of them, triggering interesting voice lines, even with bosses. Loop Hero may fall into the idle game (ish) genre but adds its own twist to the formula and seems unique. Loop Hero has personality, which is something I really like.

And once you’ve built the different camp buildings needed for those, you can play as a Rogue or a Necromancer even. These come with different stats and mechanics. The Rogue, for instance, can only get items by exchanging trophies at the camp upon entering a new loop, which makes him quite hard early on but rather satisfying to play as once you get those fast attacks and big crits in. My favourite class, however, is the Necromancer (I may be biased) as you let your little skeletons tank and hit for you and turn the battle into a battle of atrocity. Will you be able to summon enough to deal with your foes or will they target you and end you before your army is up and running. Stats like “magic HP”, which is an over-health shield that protects the Necromancer at the start of every battle, or the Summon Quality, which dictates special skeletons’ summon rate, become rather interesting to play with. The Loot in general is very fun to play around with as your inventory is constantly fixed to the UI at the right and as all equipment pieces may grant you stats that are more important or less important for you. I kind of felt like I’m in Diablo 3 again where my specific build required more attack speed or higher skeleton levels and I had to wait for that specific drop with a specific roll. It was interesting and fun.

But despite all the praise, there are a few things that I didn’t like. For starters, the game can be sped up to double speed but doesn’t go further than that. I would have liked it if you could maybe speed it up to 4x or even more than that since the first and even second beginning loop can be rather slow after every run. At the same time, the world would have felt more immersive if some weapons, rings, and gear, in general, would have had special RPG-item-names that potentially get randomly rolled. I feel as if that would add a lot of flair to the game…

Other than that, I don’t have any complains really. Loop Hero is an interesting take on the “One Hero has to save them all” kind of RPG where your hero is actually trapped in a hamster wheel. The game can be challenging and unforgiving, like other roguelites, but overall, I enjoyed this one to bits and haven’t seen a game this polished in quite a while. It’s easy to understand, quite accessible and even has options that allow you to make the fonts dyslexia-friendly or to remove the CRT Shader for better visibility. Honestly, more developers should do add little features like this to their games in 2021!

Edit: As Naithin pointed out in a comment below, I phrased a sentence in a confusing way that can be interpreted as if every loop brings you closer to the boss. That is not the case. I changed the according passage to get rid of that confusing part and make it more clear. Apart from that, I also removed part of the sentences about the bosses as I figured that it would be more interesting if you saw it for yourself, aka I reduced the spoilers to basically little to nothing here, although it’s nothing big really, I guess.