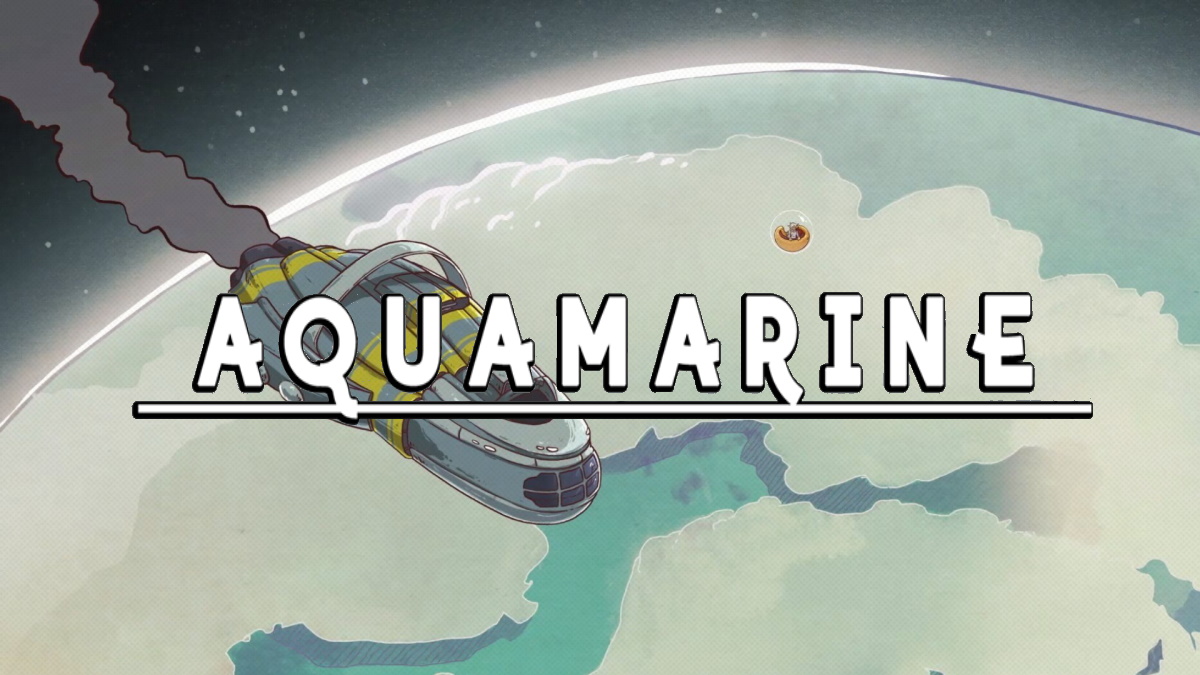 Aquamarine is a quiet survival adventure about perception and discovery in an alien ocean. You explore a planet reclaimed by nature after your starcraft was intercepted by a malicious signal causing The Seeker’s starcraft to crash onto the uncharted planet. Now, you’re stuck on an island with nothing but your amphibious pod to work with and you have to somehow find a way to not only survive but also get to your starcraft. On your journey there, you’ll find out more about the game’s flora, fauna, and history as you have to plan out your next move non-stop.

The game plays like a mix of point n click adventures and strategy-puzzle games. Movement is turn-based with you selecting tiles to check out. Every move, however, uses up energy that you have to refuel by consuming crystals. These can be found nearby and you often have to evaluate whether or not spending energy to collect a crystal is worth the energy it brings to the table. Similarly, you also have to collect other items like seeds and food items to survive – and you may even find disks and other interesting items to improve your base of operation and just have a better time in general. Also, you can get high in the game. That’s a thing. I love it.

As I played, though, I found that the expectations you get from playing this game don’t often align with what experience in reality. You may think this is a chill and relaxing survival exploration game, along the lines of In Other Waters. In reality, though, the game is difficult and punishing. Every action you take has consequences and I just assumed that that means that you’re given choices that reflect on the ecosystem or the story… but in reality, the game just saves after every single thing you do. It’s punishing and challenging, which you might not expect. The game only has one single save file and after basically every single move you do, the game saves. If you get attacked, the game saves. If you leave, the game saves. If you die, the game saves. Dying isn’t too big of a deal as you just respawn on your island and go back to where you were but if the game crashes, the game also saves… Right before the crash. That’s frustrating because you now are in a situation where the game doesn’t work but you can’t just revert to a previous save file. Instead, you may visit the Aquamarine Discord and ask if there’s a fix for the issue. The developer responds quite quickly which is nice but at the same time, I dislike this design choice and I think multiple save files or less frequent autosaves would be better.

When it does work though, the game is beautiful. Aquamarine has this sort of comic-style vibe going for it with pop-art-esque visuals and an incredible soundtrack. It’s very chill and I’d definitely recommend turning off the tutorial after you understand the basic controls because the game really wants you to play in a certain way and if you don’t do that, you’ll get punished for it. Disabling the tutorial really helped me actually enjoy the game. Eventually, I even lowered the difficulty because energy costs were too much for me. I can see how people would like the added challenge but personally, I just find that the game’s overall vibe is ruined if you get stuck somewhere or have to reset a bunch of times. I also don’t want to lose my progress for getting soft locked again, so I’m playing it safe by preventing all soft locks possible until they get fixed. The game gets updated rather frequently and it’s by no means polished. Your experience may differ a great deal from other people’s experience, so I’d say “give it a go” if it wasn’t for those crashes. They get very frustrating and ruin the experience, so… as I said: When it works, it’s great, but often it doesn’t work, so there’s that.

The exploration bits are also quite fun. I unlocked this ability of sorts that enables you to bash into things to destroy corrals and unlock new paths. At the same time, you can always travel back and forth between areas for less energy than it would have cost you to get there, which is… interesting? It makes backtracking easier and more fun but at the same time, I find the whole energy mechanic a bit annoying to deal with, personally. Back on your island, you can also fix the need for sleep and food by setting up a garden. I like the gardening in the game even if it takes a bit of time to get used to. Sleeping only really passes time which makes sense given that some of the local fauna only appear at specific times of the day. Scanning everything is fun as you unlock more and more entries on critters… and it gives Aquamarine this marine biologist vibe that In Other Waters had. I like that a lot actually and as you explore more, you learn about the planet and its mysteries – and about why you crashed onto this planet in the first place.

Overall, Aquamarine tries to do a lot of things. It tries to be this sort of Mystery-Exploration game but it also adds Strategy and Point n Click mechanics to its formula, making the experience feel rather well-rounded. If you’re into the psychedelic sci-fi of the ’70s and ’80s which Aquamarine is inspired by, this may be the game for you. However, I find the auto-save function incredibly annoying to deal with and it may take a few resets for you to get into the groove of things. I’d recommend playing the game for yourself, albeit at a lower difficulty. The hand-drawn style really works well for the game and it can be a very immersive and breathtaking experience if you have the patience to deal with some of the issues the game has that will probably get evened out soon. I initially really wanted to like it but I couldn’t find myself enjoying the game due to the setbacks I experienced. After giving it more time (and disabling the annoying tutorial), I’ve grown to love it even more. It certainly isn’t a game for everyone but I think the exploration bits are done really well and while it may not be the best survival game, it does quite well on the adventure/mystery front.