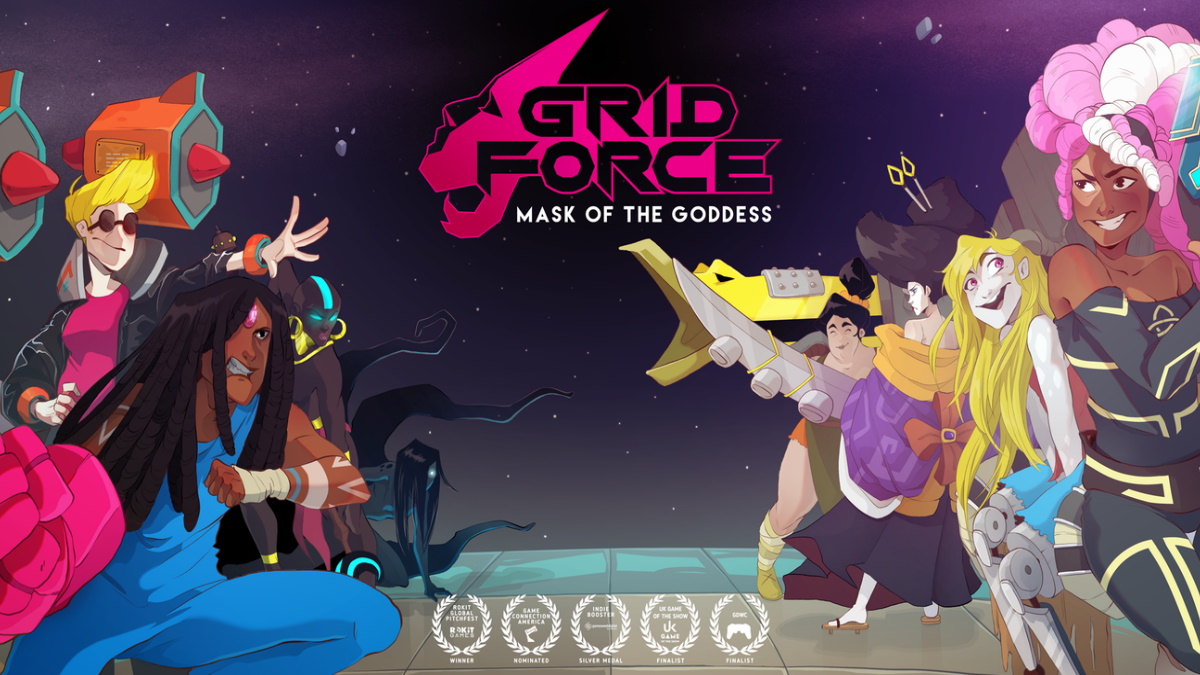 I was incredibly excited about this year’s Gamescom, not just because it’s the first Gamescom in three years since my first-ever stay over there, but also because this is the first time that I, as a blogger, was invited by people to talk about their game at their booth in person and do an interview and stuff. Hell yeah, that’s awesome!

The developers in question were the people from Dreamnauts Studios who are currently working on Grid Force which is a tactical Bullet Hell game… and yes… that’s “tactical” and “bullet hell” in one sentence. Sounds off but it actually works really well!

I actually planned on talking to them anyway since I loved the demo on Steam and since their Twitter mentioned that they’ll be attending this year’s Gamescom… so, being mailed by them has been an honour and really exciting for me!

The demo I played at Gamescom had more content than the demo on Steam but regardless of that, I’d recommend checking out the demo and wishlisting Grid Force – Mask of the Goddess if you wanna stay up to date.

The game’s releasing at some point in September (yes, that’s this month) today, so go check it out! Right now! Go!

It’s an interesting title with a diverse cast of characters, some story behind it, and a unique spin on RPGs and Real-Time combat with grid movement and strategic decisions that need to be made literally on the fly as bullets come flying at you!

Anyway, in this interview, I was talking to Noemi, the person responsible for the art. Originally, I was supposed to talk to someone else but due to reasons, we had to reschedule and Noemi offered to answer the questions for me when I stopped by.

Long story short, I got to talk to the artist of the game and that was amazing because of the insights I got into telling stories through art!

Hey, can you state your name and position at Dreamnauts Studios?

So, I’m Noemi and I’m part of Dreamnauts Studios. We are developing Grid Force which will release soon and in the studio, I’m the concept artist and the comic book artist!

What is Grid Force about?

Grid Force is a tactical bullet-hell RPG. That means that with each path, you follow a story with a lot of lore to explore. You can see the story by reading the comics that are shown between the fights.

They’re all unique, so you can manage your own squad and level them up. You decide who is your favourite.

What was your favourite part about working on the game?

Everyone has a favourite child.

Yeah, she’s my favourite child. (We laugh.) I love the creative part of working on this game. So, when you have the idea and have to put it on paper, that’s the best moment for me, really! As an artist, having an idea and turning it into something that everyone can see, that’s the best thing [for me].

So, you told me earlier that storytelling happens in the form of comics, right?

How did that come about? Or why did you want to put comic art into the game?

So, the story was huge from the beginning and we saw that it was too much to be “just text”. It was too much to read – and we had so much to tell. We have so many characters with their own stories to tell.

Because of that, we decided to try out comics and this came out nice as a combo of cutscenes and comics. What was really nice about that is that I already had experience with that.

The great part about Dreamnauts is that everyone brings in their own background, experience and hobbies – and mine was making comics! So, we added them to the games and we believe that it helped a lot with the storytelling.

What was the most challenging part about working on Grid Force for you?

This question. (We laughed here.) You really got me there!

(Instead of skipping it, Noemi passed on the question to a co-worker. I think his name was “Vini”…? I’m not sure here, as it was quite loud at the booth/event.)

What a lot of people in the studio said was that the hardest part was making the story and making it come together. We had a lot of ideas and had to really make it work together without breaking anything.

All of these stories need to work with the gameplay, too, which is very different from your usual story-based RPG.

And it made everything even more challenging to make it come together but we did it and we’re very proud of that!

As mentioned, previously, Grid Force is coming out very soon today and I highly recommend checking out the demo as well as wishlisting the game! The people at Dreamnauts treated me well, even after the interview. When I was tired and ready to leave, they even provided me with water and an energy drink and snacks and stuff, haha.

They are all very kind and cool people to chat with and you can really feel how their different backgrounds also influenced the game, which is… unique to say the least. It’s not something I got a lot from meeting developers at events such as this one.

But seriously, I’m looking forward to playing the full release of Grid Force this month soon! And honestly, you should, too! It’s an interesting idea that is implemented really well!

Note: I scheduled this post originally to come out on the 15th of September, not knowing that the game would release on that day as well. Anyway, I decide to edit it and change the two instances where I said that it’s releasing “soon”… but given that, I loved this coincidence, I kept it there, sort of. Hope you enjoyed that as much as I did.

One thought on “Grid Force – An Interview with Noemi from Dreamnauts Studios!”