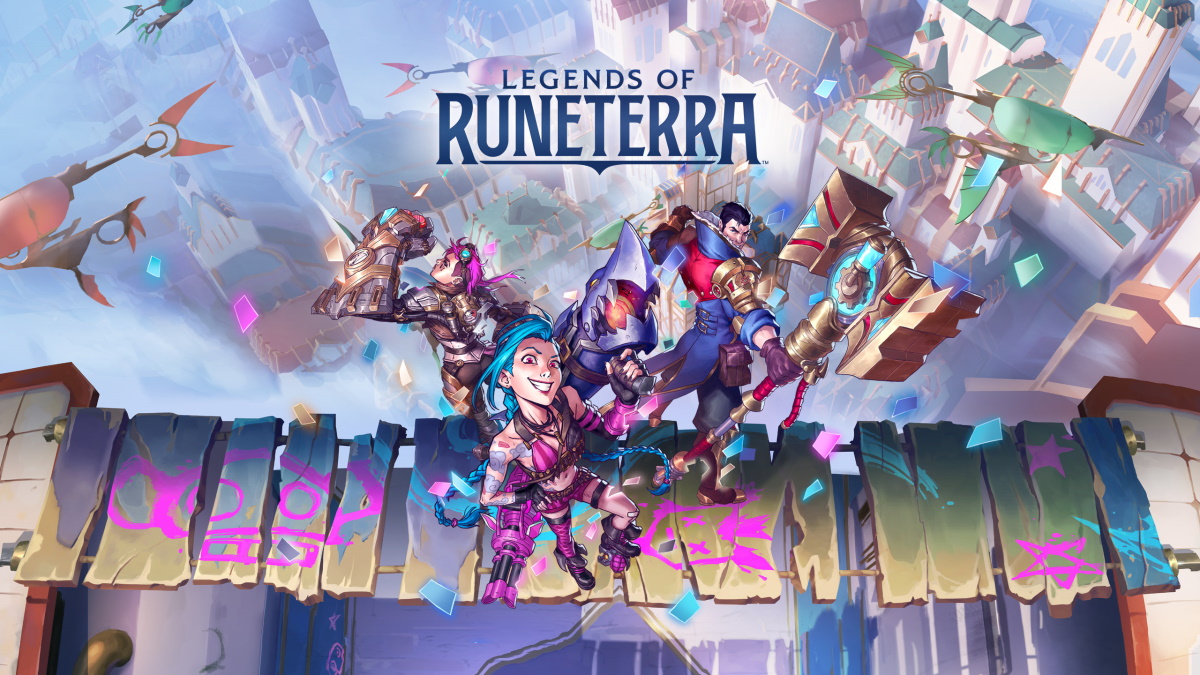 It’s been a while since I last wrote about Legends of Runeterra. In fact, this post over here is the only post I did on that game – and I basically stated my excitement about it without ever really feeling like writing about it again. Well, that changed.

I initially played a lot of it in the closed beta and then I played it on and off over the past few years. I had my frustrations with the game as specific cards were way too strong… and that changed as cards got rebalanced, champions were nerfed, and others were buffed. Lately, I’ve really been enjoying the game again.

I think part of the reason why I’m enjoying the game so much is that you have different “regions” that you level up as you play the game. The idea here is that you can get a lot of resources to craft cards or just straight-up get cards by playing the game, for free. And the game essentially keeps tossing (that’s a pun right there because of something I’ll mention later) rewards your way, sot hat you can keep playing it for free. Naturally, there are some cards that can be purchased with cosmetics but they don’t do much on their own as you need 40 cards in total, out of which only 6 can be champions, right?

Anyway, lately, I’ve been trying to build a Norra deck but I’m lacking cards and I can’t craft everything, so I’m levelling the Bandle City battlepass until I have everything I need. That, however, requires me to actually win games at times.

So, to do so, I can’t play my “Run it down” deck (that I may write about at another time once I’ve made it better) anymore since it’s not meta and since it has a lot of weaknesses… rather, I tried out a few other decks I built over the past few years and surprisingly, my Deep-Maokai deck is actually really good. I did some tweaks to it but at its core, it stayed the same.

I summon the mighty Maotilus!

This over here is sort of a low-budget version of what I initially had in mind. Initially, I also had some extra copies of Devourer of the Depths and Abyssal Eye in there but I decided to remove them… mostly for Sea Scarab.

This deck’s premise is that you essentially toss a lot of cards (removing them from the deck/game in the process) and try to get “Deep” – once you’re deep, all your Sea Monsters gain bonus stats making them overwhelmingly stronger. On top of that, all sea monsters that were tossed away are brought back into your deck once Nautilus levels up. Nautilus, however, only levels up once you’re deep. At that point, Sea Monsters will cost 4 Mana less.

So, Sea Monsters are sort of one engine for this deck. I’ve got three copies of Jettison (Toss 4) in there, three copies of Lure of the Depths in there (Reduce the cost of Sea Monster allies everywhere by 1, draw a sea monster), and I’m running Salvage twice (Toss 2, Draw 2) and Glimpse Beyond three times (Kill Ally to draw 2).

This means that all of these cards will essentially try to get rid of our deck as soon as possible, resulting in our sea monsters levelling up. Sea Scarab further emphasizes on that by tossing one card when another ally dies or when it dies. Thorny Toad heals our nexus and tosses 2 when it dies. Deadbloom Wanderer tosses 3 when summons and has life steal which helps us get to a specific point.

At that point, you’re deep.

You got a big board of creatures that receive “fearsome” from Terror of the Tides. At the same time, the two Shipwreck Hoarders I have in the deck will toss 2 and create 2 treasures. When tossed, Treasures will be drawn instead. The big ones are “Platewyrm Egg” (essentially 5 mana to summon 3 5/5s with Deep (aka 3 8/8s)) as well as “Treasure Trove” (5 Mana to create 5 fleeting cards that then will cost 0, meaning you can, in theory, use incredibly big spells or summon incredibly strong cards for no mana at all… or you get nothing at all. It’s very zane-y and I love it.)

And well, if you don’t your Lure of the Depths out, you can reduce the cost of your Sea Monster by a total of 7 Mana (3 from LotD and 4 from the levelled up Nautilus).

Once you’ve got a strong board, you can often just attack with all your creatures – and Terror of the Tides will reduce the enemy strength on an attack by 2, meaning that a lot of cards at that point may not be able to block your attack given that your Sea Monsters also have “Fearsome” as a keyword.

So, thanks to Nautilus bringing back all tossed units, we don’t really care about tossing them all away. Hence, I’m pairing Nautilus with Maokai who levels up once 25 cards were tossed. He also levels up with units dying – and when you have him on the board, he summons an ephemeral Sapling (aka one more death) and he tosses 2 more cards, meaning you practically boost his level up further by having him on the board – especially with the Scarabs.

Scarabs + Maokai are a great combo because you can get to the deep end really quickly due to this.

On top of that, tossing doesn’t affect champions and since I only care about getting Nautilus’ and Maokai’s level-ups sorted out, I’m running only 1 copy of Nauti and 2 copies of Maokai in this deck. Ideally, I’d run three of each but… it can’t be helped. I’m broke.

Anyway, you toss everything and once Maokai levels up, you obliterate the enemy deck, leaving only four non-champion cards in there. This means that they have four turns to win unless they have a way of shuffling new cards into their deck.

Given that this deck is a bit risky, you could possibly end up losing to a draw-out. You try to toss a lot of cards. You also try to get to “Deep”. At some point, you’ll be low on cards and since only tossed allies are shuffled back into the deck thanks to Nautilus, you may risk of accidentally decking out, resulting in a loss… Hence, be careful with that.

The Win-Condition here is to either overwhelm the enemy with big monsters… or to make the enemy deck out by obliterating their deck. Hence, I like to play it slow. I don’t always go for big attacks early on and trades… but rather, I try to keep some defenders in place so that I can get to the mid/late game.

But still, you can also run “Atrocity” in there and maybe “Lost Riches” to increase your odds of winning. Lost Riches will essentially create or draw a treasure. Atrocity will kill an ally and deal its power as damage to anything. If you get to that point, you could, in theory, sacrifice a levelled-up Nautilus (13/13) to deal a heavy blow to the enemy nexus, often killing them in the process.

An issue that this version has is that Atrocity and Vengeance really push your mana costs up quite a bit, meaning that you can brick a lot – which is why I also added Quietus, Vile Fest, and Fading memories to the deck. They help a bit.

Still, bricking can be rough which is why playing a more defensive playstyle is rather important. Also, using Vengeance, you can shut down a lot of champions very easily. Devourer of the Depths also helps with dealing with those threats. After experimenting, I found that running three devourers and no grasps definitely helps with this version.

When it comes to your Mulligan, you essentially get rid of Champions pretty much always and I’d recommend keeping a Vengeance or Atrocity (or both) just in case. You don’t want to toss these necessarily – and if you do, you run the risk of not being able to respond to big threats like a Viego or whatever.

Apart from that, the first version of the deck features Dreg Dredgers and Shellshockers that can be nice early on. I’d recommend replacing high-cost cards and prioritizing early tosses as much as possible. Shellshockers help greatly with spell-mana and spell costs thanks to their “Attune” keyword. Similarly, Dreg Dredgers may only be 2/1 but their “Toss 3” ability also helps get you to “Deep”. Worst case, you can “Glimpse Beyond” them to draw more cards, getting closer to “Deep” in the process.

In the second version of the deck, you don’t run Shellshockers, so a lot of times, you want to have Jaull Hunters and Sea Scarabs in your starting hand. Vile Feast also helps out greatly early on, thanks to its spider creation and drain ability. I mean, you essentially create a blocker whose death will help Maokai evolve.

Since you’re not running Shellshockers, you may brick more with this given that you have high spell costs and a lot of spells – but fewer monsters that could potentially get reduced in cost. You’re also not running Lure, so you can’t flood the board quite as easily but Nautilus is still a beast.

This deck has been a lot of fun.