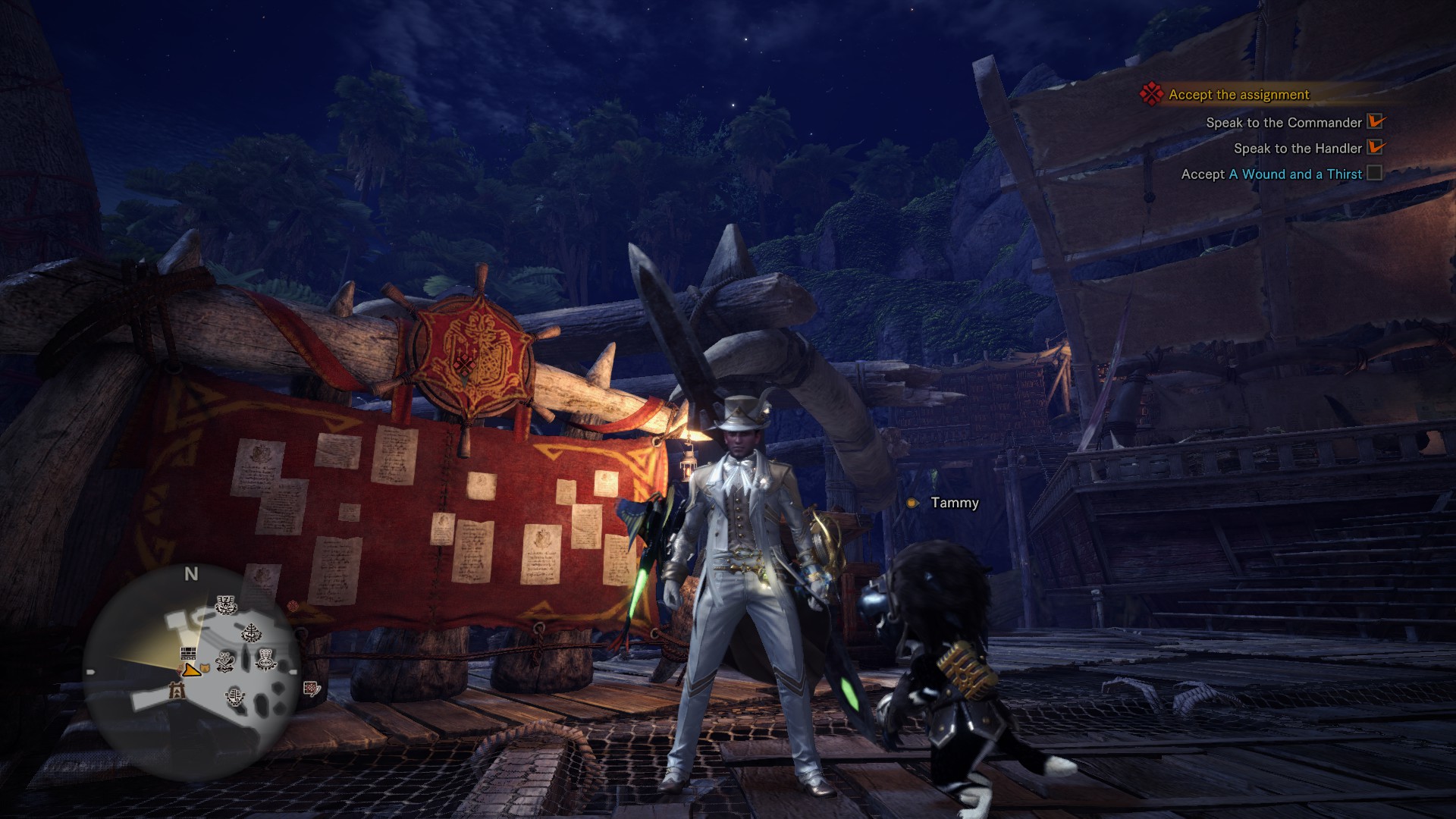 In today’s MonHunLog I’d like to talk about the new weapon I discovered and got to love. The Insect Glaive. We also fought our first Elder Dragons and since we tasted blood, we’ll fight three more in the next play-session and document those in the next MonHunLog!

Now, the Insect Glaive is a special one. Essentially it’s a spear that is working with a so-called “Kinsect”. Not only do you have several slashes, thrusts and other attacks but you can also launch yourself into the air and slice through monster or even mount them without having to jump off a ledge. Handy!

Before, I’ve been mainly playing with the Hammer and the Gunlance. Here and there I was playing with the Bow as well since I couldn’t really play with the hammer against flying monsters but with the Kinsect Glaive, I’m actually in the air non-stop and am even able to mount monsters without having to use flash pods to bring flying monsters into the ground. You’re extremely mobile with the Kinsect Glaive and even fast monsters have trouble keeping up with you.

Another aspect of the Insect Glaive is… well… the Insect. You essentially equip a Kinsect that you nurture and evolve using materials. There are a lot of different trees that you can evolve your Kinsect into. I’m currently playing around with the Bullshroud II from the Gullshad Lineage (Tree), which resembles more of a Butterfly than any other bug. It evolves out of a Mauldrone and has a bunch of nice stats. For instance, I can shoot it out to create a dust effect when it hits a Monster. When I strike said dust effect, I get healed for a portion of my health, which is very nice. Instead of using the Vigorwasp Spray (Palico Gadget), I instead now go for the Coral Orchestra which I’ve only just unlocked!

The Coral Orchestra allows my Palico to boost my attack, defence or status resistances with music. I can go for a bit of a more an aggressive playstyle while still heal myself with the Kinsects now, which is quite neat!

The Kinsect also can be used to harvest extracts from a monster’s body part. You then recall the Kinsect to receive one out of four extracts with a different effect based on the colour. The red extract improves the attack, white extract makes you move faster, green extract restores health and orange extract prevents you from getting knocked back while attacking. Apparently, you get hybrid effects from multiple colours but I still need to look into that, using a guide of sorts. Maybe that’s something for the next MonHunLog.

Mission-wise, we first hunted down to Tzitzi-Ya-Ku that were troubling a few feline troopers in the Coral Highlands. Using the Insect Glaive we were either able to mount these before they could stun us OR just dash away to avoid the annoying stun effect. Therefore, it was a rather easy fight. As a reward for helping out the troopers, we received the Coral Orchestra Palico Gadget that I’ve mentioned before.

Afterwards, we went for the Food Chain Dominator quest and began to hunt down Deviljho! Deviljho resembles more of a big black pickle that spits out black clouds onto you to inflict Dragon Blight! But not only does it have this ranged attack but it also features some massive chompers that allow it to eat anything and everything! It got into a turf war with a Tobi Kadachi at one point during my hunt and it actually won without taking too much damage. Free Tobi Kadachi materials, I guess?

Its metabolism is so fast that it has to go for any prey it can see, resulting in its increased jaw strength. One of its attacks features a furious bite-attack where it lashes out four to six times in a row, dealing humongous amounts of damage! There’s also an Uppercut-like Attack where it launches you into the air, making you vulnerable to its attacks as it can just bring you down rather fast. And when you try to keep your distance, it just jumps at you, burying its massive mouth into the ground, trying to make the last meal you had your last meal at all! Wowsers!

But in the end, we brought it down rather quickly. The Deviljho has week points at the belly and the head, so essentially mounting it and then unleashing a flurry of attacks on its head is rather effective, especially if you then strike its sensitive belly afterwards until it gets back up again!
The armour we can craft from Deviljho looks weird in my opinion but I could see myself crafting it for my Palico, Tammy!

The next quest we tackled was the Event-5-Star-Quest, Kirin The Myth! Kirin is a unicorn-esque Elder Dragon that is able to summon lightning down onto you. It also features a lot of strong dash-attacks but doesn’t really do much else besides that. There are also some AoE-attacks and it can also inflict paralysis onto you, which can be rather difficult to deal with if you get hit multiple times.. but that’s nothing that can’t be taken care of, using Nulberries. Kirin’s weakness is mainly fire damage – it’s resistance to paralysis and shock-damage, though, so you better equip a different weapon if you focus on those kinds of effects.

When you fight it, it will dash around a lot, so having a rather mobile or even ranged weapon would be quite neat. The lightning-strikes it launches come either from above on multiple random spots in the close area around it or from on top of it in a stronger and more effective way, dealing a lot of damage, or in some stripes across the ground. The latter can be dodged rather easily by not standing in the area affected by its attacks or by jumping at the right time. The other two attacks can be dodged by standing a bit farther away from it. I found the Kirin Fight rather easy, to be honest, especially since we can just mount it a few times and then hammer down on the horn, using the Insect Glaive (I might as well main this weapon, it’s a lot of fun!).

The Event-Quest, Kirin the Myth, features two Kirins, though, so you may have to look out for the second one. Still… this fight was rather tame, so I wouldn’t be too worried about it for now. Maybe it gets harder in the later ranks of the game – after all, I only played the Five-Star-Event-Quest (which is in Low-Rank, I guess?).
The armour looks quite neat, though, although it doesn’t really have nice stats in the low-rank version.

After slaying our first non-canon Elder Dragon for this Event-Quest, I went ahead and attempted my hunt on Nergigante, the first canon-Elder that we’ve got to hunt down to restore the balance in the ecosystem. Before, we’ve encountered Nergigante when we tried to capture Zorah Magdaros and when we lead Zorah Magdaros into the sea. Nergigante is an Elder Dragon that feasts on other Elder Dragons and therefore can be found in Elder’s Recess. It is covered in Splinters and Horns on various body parts and features a few dash and lunge attacks, making it quite tricky to beat. It also deals huge amounts of damage with my current High-Rank-Armour-Loadout (partly Defender-Armour but also the Harvest Coil, the Skull Mask and the Dragon Resistance Charm).

When you hit or break different parts of its body, it recovers them by adding more splinters to them that get harder over time to the point where you deal no damage to it. Fresh splinters are still white and turn black over time. Hitting the white spots is key to slaying Nergigante as these horns are still fresh and soft, receiving more damage. Once hardened, they receive less damage and your attacks get repelled of it.

In the end, we managed to only faint once and eventually slay it rather quickly, which I was rather surprised by! Although we’ve slain it, the balance in the eco-system still wasn’t restored, so our quest continues as we try to beat Kushala Daora, the Dragon of Steal, as well as Teostra the Infernal and the Hellish Fiend Vaal Hazak, as these Elder Dragons from the Old World have shown up in the New World now! Fearing Nergigante’s endless hunger, they fled Elder’s Recess and made the Ancient Forest, the Wildspire Waste, and the Rotten Vale their hunting grounds. So, after a little bit of research, we now have the chance to fight these Elder Dragons and, yet again, try to bring balance to the eco-system – but that’s something for the next MonHunLog.

I hope you’ve enjoyed this post. I very much enjoyed fighting these new monsters and unlocking the armours for them. Sadly, the Defender Weapon very much can carry me through all of this as the last level of the Defender Glaive is able to top every other weapon (so far) by more than 200 damage! Also, while the Defender Glaive’s element is blast (which usually is really strong against all types of Monsters), the Kinsect can be customized to have a different Element and different effects depending on the combination of weapon and Kinsect you use.

Anyways, I’ll see you in the next post. Have a nice day! Cheers!