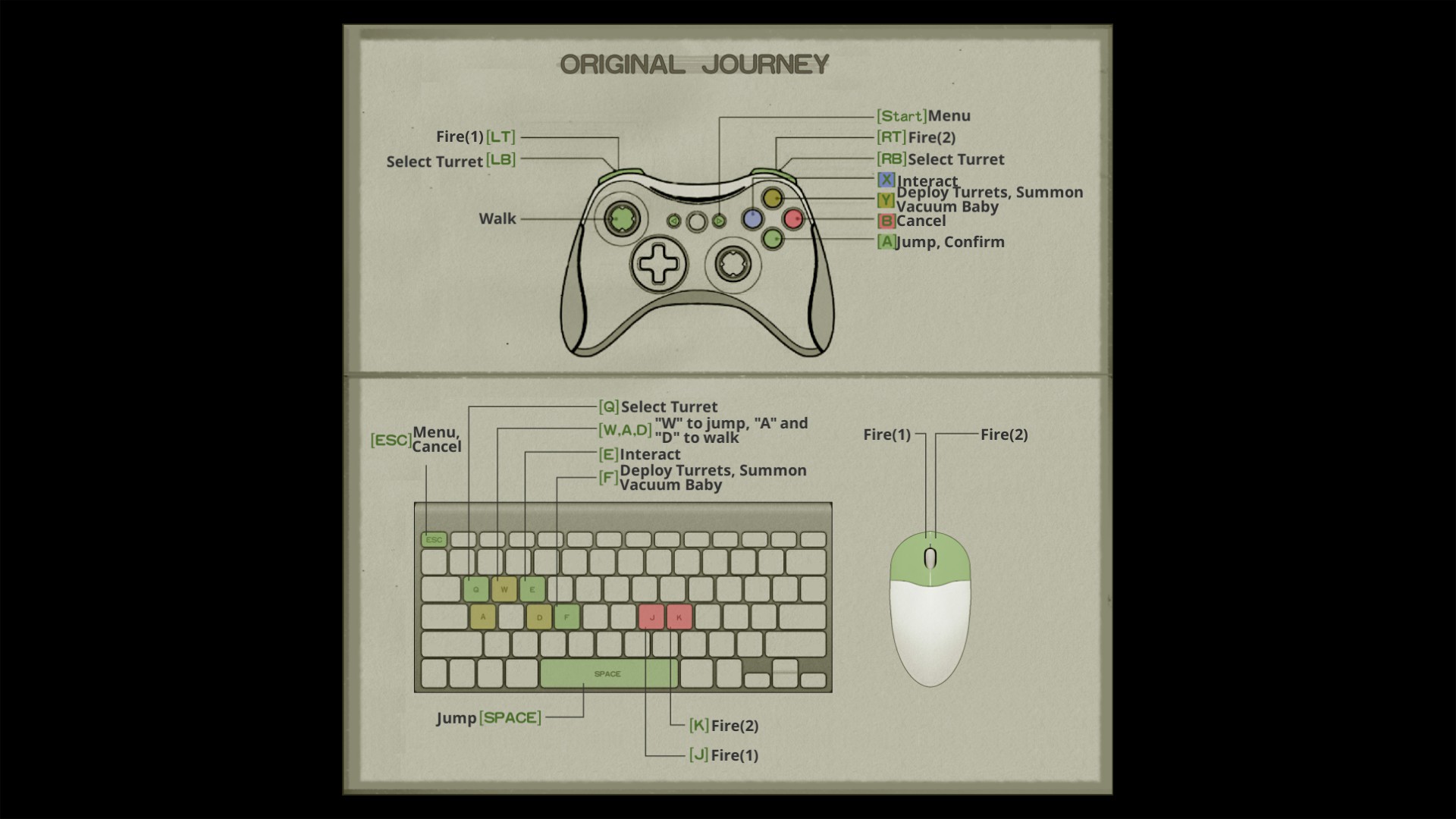 In today’s Indietail review, we’re talking about Original Journey: A hand-drawn, sci-fi action-adventure where we join the Ato as they embark on a mission to a distant planet, known as the Shadow Planet, to find a certain crystal that can save our own species and even our dying planet.

After a bit of an epilogue, we get thrown into the world of the Ato whose last hope, their battle-ship, has finally landed upon one of the floating islands of the Shadow Planet. The main character of the vegetable-like species of the Ato oversleeps, of course, and therefore ends up being used by the Commander as a meat shield. After beating the tutorial where we learn about movement, aiming, weapons and turret-placement, the Commander is astonished at how well we survived and did, which is why he lets us take part in actual missions that revolve around exploring the planet and beating enemies to receive resources and crystals, which are needed for new weapons and new suits, each with their own unique characteristics.

Essentially, you can fly out and explore the planet, landing on one level after another, each with randomly placed enemies and special events. On some islands, we get ambushed while on other islands we prepare and ambush the ambushers, one some islands we help out other people while on others we get healed and we receive free loot and ammo. There is a lot of variety between special events and normal islands and a variety of enemies as well, each with different strength levels and different attack/move sets. We can use two weapons at a time and place down two turrets per island, although we need to recycle turrets upon leaving an island to receive some Ammo back. Ammo and resources are limited, which is why you’ve got to either take a risk or frequently go back to base again to restock on Ammo and Health, store your loot and possibly upgrade or unlock new suits and weapons.

Levels get increasingly difficult and the farther you go, the more of the story you’ll be able to unlock.

At some point, you really need to take risks. There is a fast-travel option but it requires a lot of Crystals (the currency farmed from enemies) which is also important for weapons and suits. Therefore every hit has to land on every previous island to not waste too much ammo. Sometimes you need to do base-stops and sometimes you just risk going for another island in hope that you get a supply drop on the next one to refill on ammo. At some point, levels get too difficult with way too much going on, which is why you also need to level up your character and upgrade your stuff to proceed.

The game very much relies on „rinse and repeat“, which is standard for a bunch of games, I’d say, but it also needs to be done well.

While the game seems easy at first, it gets harder and harder over time, especially when you still need to grind certain rather rare materials to get your next weapon. And the worst thing: You don’t know what weapon you get. You can test it out after you’ve unlocked it but there’s no name to it before you unlock, resulting in a bit of a frustrating experience where you get something for the sake of unlocking it and don’t know if you like it. While I enjoyed the Saber, for instance, the other weapons so far have been difficult to use and are absolutely not my playstyle. Thus, I’m only using the grenade launcher and the sword, mainly as the sword doesn’t require ammo and alas can’t run out of ammo, despite having the drawback of having to get close to the enemy.

There are also other annoying elements to the game. For example, your health gets completely refilled when you level up, which can make some levels extremely close and very fun to do… but there are no enemies in some of the boss levels to give you the necessary experience to level up again and save yourself or save a run. When you die, you lose your stuff and need to retrieve it… but in boss levels, that mechanic is missing completely… and I haven’t even touched upon the art style…

The art style is hand-drawn and I’d describe it as either hit or miss. You either really like it or you hate it. In my case, I liked it in the beginning and really enjoyed the interesting mix between a sepia-esque colour-scheme and the green colour as the only thing that is different (apart from the red health bar of course). BUT over time I noticed a few major flaws with the design. Sometimes you have other characters/NPCs in your levels that help you out and look fairly similar to you, making it rather hard to distinguish who your character or who the NPC is… there is a bit of a green dot above your character but it isn’t really helping all that much and can be easily overlooked with a ton of enemies on the screen and all of that.

The game is quite repetitive and after getting used to the fiddly controls or rather after getting used to the two weapons that I wanted to use instead of the other even more fiddle weapons, I ended up being frustrated for the sole reason of the game being badly designed in a way.
I guess this might be the right game for you if you like an unnecessary challenge game that (according to steam users) can be finished in anything between six and twenty hours, depending on your skill-level and play-style… but I personally can’t recommend a game that has so many flaws and isn’t able to outweigh the flaws with the good sides.

I hope that you liked this post. I was excited to play Original Journey as it has been sitting in my library for nearly two years now but sadly it kind of disappointed me, which is quite a bit of a bummer.

Until the next time, cheers!

One thought on “Indietail – Original Journey”