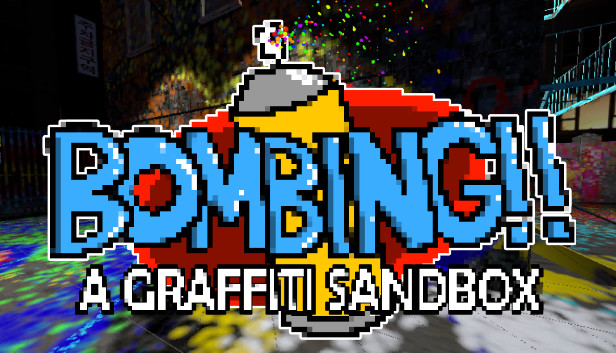 Graffiti combines the best parts of art and vandalism. It’s fun and interesting. You get to make ugly places pretty, you get to piss people off, and you can play around with chemicals. Fun! Yay! Today, I wanted to talk about Bombing!!, which is a Graffiti-Sandbox game where you can occupy all spaces with colour, vandalism and writings.

Honestly, I’ve never really been into graffiti personally as there weren’t any spots where you could do it in my hometown. In the city I currently live in, there are spaces that you can spray away at, but if I were to do it anywhere else… yeah, that would get quite pricey. Still, it’s a pleasure to have a casual game like Bombing!! available to me as I can do as I please and just get a bit creative. I’m quite big into Pixel Art but haven’t tried anything in a while… and hence, I figured I may as well try and recreate my logo and avatar in the game.

To do so, I simply grabbed the bag and chugged it down on the ground where I wanted to start spraying. The bag contains a bunch of spray cans with neon or normal colours. It also includes a bunch of pens (?) that can be used for details or to polish the painting. By pressing Q or E, you can change the output of your spray can, which I personally liked a lot as I wanted to start off by changing the colours of the background or adding a pride flag into the background. In the case of my little project, I started off by spraying the background using the “firehose” output selection. Then I made it slimmer to spray in a rough sketch of the colours and added the details afterwards. I had to correct it here and there and while it’s not perfect, I like how it turned out.

The game’s premise is relatively simple and it’s fairly casual overall. You can go to eight different areas, including the tutorial, a factory, a subway and other places. There you can find trucks, walls, and other places to spray on. It’s mostly about getting creative and designing/illustrating a logo, a drawing, or anything really. What I very much like about the game is that you always do this at night, seemingly. I felt kind of sneaky and secretive spraying onto a subway Funnily enough, you sometimes have to crouch (via Control) or use a ladder to get to places, which is a nice touch, although kind of annoying. And eventually, once you’ve sprayed a whole lot from one can, it can also run out and you’ll need to take a new one and dunk it on the ground. Either way, small little touches like that and the little “wank” you give to your spray bottle… are nice. I like those little details. It’s cute. :) At the same time, you may have to use a flashlight to see and lay it on the ground to be able to paint. I would have liked it a bit more if the flashlight could be placed in your offhand or mouth or whatever, like in Phasmophobia, by pressing a button… that way you could maybe see more, but then again, I’m no game dev and I don’t know how unity works.

The colours themselves are quite pretty. The neon colours stand out a fair bit while the normal colours give a good contrast to your other colours. I would have liked it a bit more if you were able to mix colours more or if you could use more colours. Neon Pink, for starters, isn’t exactly what I need but I can’t really use anything else in the bag. Being able to customize your loadout and return later would be quite a cool feature. The same goes for potentially earning more colours by covering more areas or whatever. That’d be lovely, in my opinion, as it would also add a bit more replayability and/or depth to the game.

Bombing, after all, is a fairly casual experience and a relatively simple and relaxing game. You spray pictures on a wall or whatever and cover the world in colour. It’s cool and has its nice moments but it may not entertain you for hours on end. And it doesn’t have to. I mean, it’s nice to return to pixel art again after so long and I’ll probably end up playing this on and off or to return to this whenever I need to space out for a while.

It’s almost therapeutic when you fill the canvas/wall and I like that about Bombing. I don’t exactly get why it’s called Bombing, but either way, I really enjoyed my stay in this game. The mellow tunes by independent artists are actually quite fitting for this sort of game. You can space out and relax for a bit using this game, especially because of the music. Meanwhile, the crunchy and somewhat pixel-like environment looks quite nice.

Bombing!! isn’t perfect, obviously, as there could be brushes or rollers or maybe more colours in the game but I’d imagine that a lot of people may be quite happy with the game in its current state, especially for this price. Regardless of that, more updates would be nice! It’d be even better if you could spray at different times, mix colours, play on even more maps, or if you could remap your keys. Overall, though, I’m recommending this title. The tunes bop, the spraying works well, and overall, it’s very casual and quite relaxing.

One thought on “Indietail – Bombing!!”